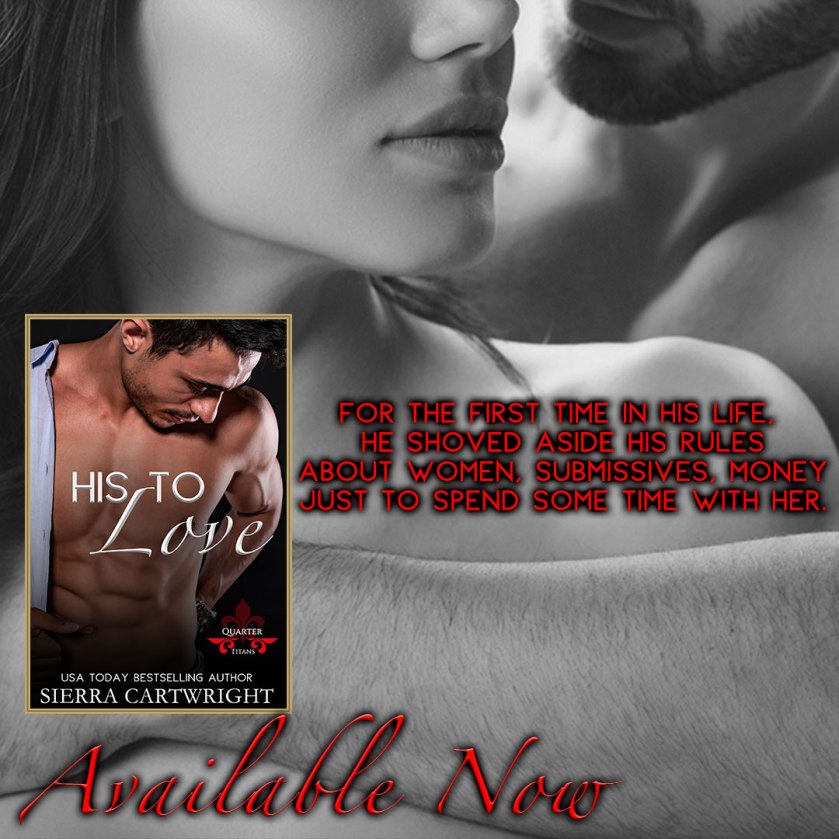 🔥He has to be in control—it’s all he knows.🔥
AVAILABLE NOW – HIS TO LOVE by @SierraCartwright
Amazon: https://amzn.to/2YDf22B
Apple Books: https://apple.co/2Y5tuQH
Barnes & Noble: http://bit.ly/35L5wNi
Kobo: http://bit.ly/2OZER8v
🌹EXCERPT🌹
But from the second Shelby had awkwardly knelt near the table, he hungered for her.
It wasn’t a maybe. It was a driving, consuming need.
She’d been fidgety, and not nearly close enough for him to touch her, even though he’d wanted to. He’d known he could reassure her lacing his fingers in her hair or simply caressing her shoulders.
As the evening progressed, he caught the beautiful wannabe sub looking at him. There was innocence in her wide green eyes, captivating him, grabbing him by the jugular, refusing to let go. That—maybe—he could have ignored.
But when her beautiful lips parted slightly, he imagined her beneath him, her hands pinned above her head. Her surrender to his demands would be total and oh so damn sweet.
For the first time in his life, he shoved aside his rules—about women, submissives, money—just to spend some time with her.
And now, she was his. For one week.

The Sinner by Emma Scott is releasing August 15, 2021!
I married for safety but I got the most dangerous thing in the world--Ronan Byrne for a husband.
A Deal With the Devil by Elizabeth O'Roark is releasing August 10, 2021!
The Perfect Ruin by Shanora Williams is releasing August 3, 2021!
What happens when a fake relationship turns into something real?
Whit Lancaster burst into my life like a storm. Dark and thunderous, furious and fierce.