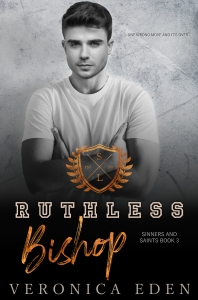 THEA
One wrong move and it’s over.
I was invisible until I wasn’t.
One mistyped number became the catalyst to my hell on earth when I accidentally sent a risqué photo to the blackmail king of Silver Lake High. Now Connor Bishop holds it as a bargaining chip over my head. I’ve become his doll, at his mercy in a corrupt castle.
Better do as he says or else, or else, or else…
His thumb is on the send button every time I try to buck his command. Can I survive a private photo going viral instead of living this life of torment?
It’s not right. Maybe it’s time his castle burns down.
CONNOR
Secrets and favors built my throne.
Meek. Shy. Wholesome.
Thea Kennedy was picture-perfect innocence until she wasn’t. The unexpected photo is the juiciest secret to land in my lap in a while. Who knew she was hiding luscious curves under frumpy sweaters?
With one racy selfie, Thea stepped into my world, where I control the board. I’ll trap the little mouse and won’t let her escape the depraved kingdom I built.
But there are darker monsters than me lurking in the shadows. They want to take a bite out of my little mouse. I don’t like sharing what’s mine.

“You’re still not forgiven. I’m only here because you’re blackmailing me. I wouldn’t come near you otherwise.”“You certainly were ready to come all over me before.” The glare I direct at him drops the temperature in the car by a few degrees. He blows out a slow, strained breath and grips the wheel with both hands. “Okay. Whatever. Noted.”We ride in silence for a long stretch. The drive to school isn’t long, and I realize I’m wasting a good opportunity for the details I’m desperate for.“So what’s our deal? Or rather, your deal that I have no choice but to accept because the alternative is…yeah, no thanks. Asshole.” I shift a little to face him better as we drive through Ridgeview, turning onto the tree-lined road that leads up to the school. “When did we get together? How did it happen?”Connor cuts a look at me from the corner of his eye. “We’ll keep it simple so it’s easy to remember. We’ve grown up as neighbors. Got together over summer or something. You’re the girl next door, what’s not to like about that?”I frown as he hitches a shoulder. “That’s unimaginative.”Amusement crosses his face. “We could always use the true version: you sent me a wrong number nude and I was like aight.”“You ass! We are not using that. And I wasn’t naked.”“Yet. Shortly after?” Connor hums, shifting in the driver’s seat. “So gloriously naked.”With a scandalized squeal, I swat his arm, overwhelmed by his proximity and what he’s saying. He drives me to things I never do.He laughs. The corner of his mouth tugs up in a crooked grin as he turns the wheel with the heel of his palm, entering the student parking lot.“You want a whirlwind romance, or something? I’m just trying to make it easy. It’s not like it’s real.”The words slice me and I suck in a pained gasp.It’s not real.Right.For as big as his SUV is, I’m suffocated by being so near to him while my emotions spiral.Connor is my first actual boyfriend, but it’s all fake. 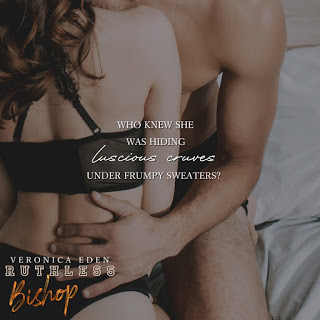 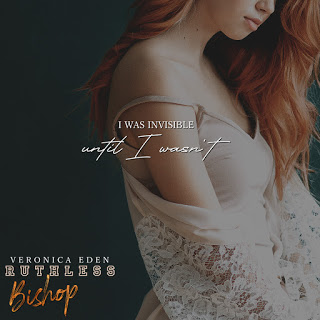 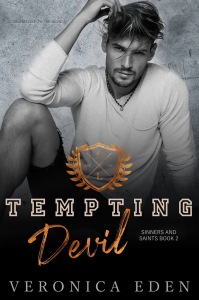 Veronica Eden is the author of dark new adult romances + reverse harem romances with spitfire heroines and irresistible heroes. She loves exploring complicated feelings, magical worlds, epic adventures, and the bond of characters that embrace us against the world. She has always been drawn to gruff antiheroes, clever villains, and the twisty-turns of morally gray decisions. She believes sometimes the villain should get the girl and is a sucker for a deliciously devilish antihero. Veronica Eden is the pen name of romance author Mara Townsend. When not writing, she can be found soaking up sunshine at the beach, snuggling in a pile with her untamed pack of animals (her husband, dog and cat), and surrounding herself with as many plants as she can get her hands on. 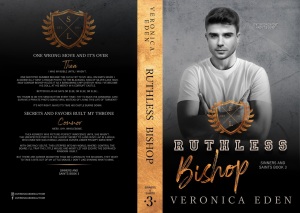 Ruthless Bishop by Veronica Eden
My rating: 4 of 5 stars

When I met these two crazy amazing characters in the previous Sinners and Saints book I couldn’t wait to get all the deeds on them.

I love Thea’s spunkiness and Bishop’s jerk ways. Together they are explosive and stunning. This is so much more than a bully read, we also get mystery and suspense. Oh I love how Rico-suavey Bishop is. He has the biggest heart that he keeps hidden. Loved these characters and their story.