A Sensual, Powerful, And Thought Provoking Tarzan Retelling
Eden Matthews stumbled upon the discovery of a lifetime while photographing wildlife in the deep in the heart of Africa…
A gorgeous god of a man living in the wilds of the African jungle among a family of gorillas…
When he saves her life she’s compelled to uncover the man’s tragic past and the fate which led him to grow up in the wild.
But Eden soon learns she can take man from the wild, but she can’t take the wild out of the man…
When her savage savior soon shows her just want he wants of her… her sensual surrender, she finds she can’t resist him teaching her how to love… in the wild.

Being the new VP of the Royal Bastards MC, Detroit Chapter, has given me everything I’ve ever needed in life; A family, A brotherhood, and an outlet for my rage. They call me Chrome. Not only for the way I care about my bike, but also because they know my heart is impenetrable.

When a revelation from my personal life comes out and my loyalty to the club is questioned, Cam’s the first one to stand her ground for me, making me question everything I’ve ever known about my own heart.

Will she be there as my entire life falls apart around me, or am I destined to lose everything, including my sanity?

Check out the first book in the Detroit Chapter Here ~~> https://tinyurl.com/yc63p3pm

To keep an eye on the Royal Bastards MC, check out: https://www.facebook.com/royalbastardsmcbooks/

The Fallen: Genesis is a prequel novella in The Deadly Virtues Series and MUST be read before RAPHAEL (DV: book one).
*****
THE FALLEN: GENESIS
(A Deadly Virtues Prequel)
IN THE BEGINNING…
They told them they were evil.
They told them they were possessed by demons.
They told them that darkness ran in their veins.
Holy Innocents Home for Children is a haven for orphaned boys who have nothing and no one. The priests watch over them, educate them, raise them in the family of the church.
Except for some.
Seven of the orphans are no ordinary boys. They attract the attention of the priests for their acts of violence, of bloodlust. The priests realize these boys are drawn to the darkness.
And the priests are no ordinary priests. They are the Brethren, a secret sect who believe themselves on a divine mission to seek out evil in the boys in their care. Seek it out, and then drive it out.
The seven have fallen from God’s grace. And the Brethren will cleanse their blackened souls…
Dark Contemporary Romance novella. Contains sexual situations, violence, sensitive and taboo subjects, offensive language and topics some may find triggering. Recommended for age 18 years and up. 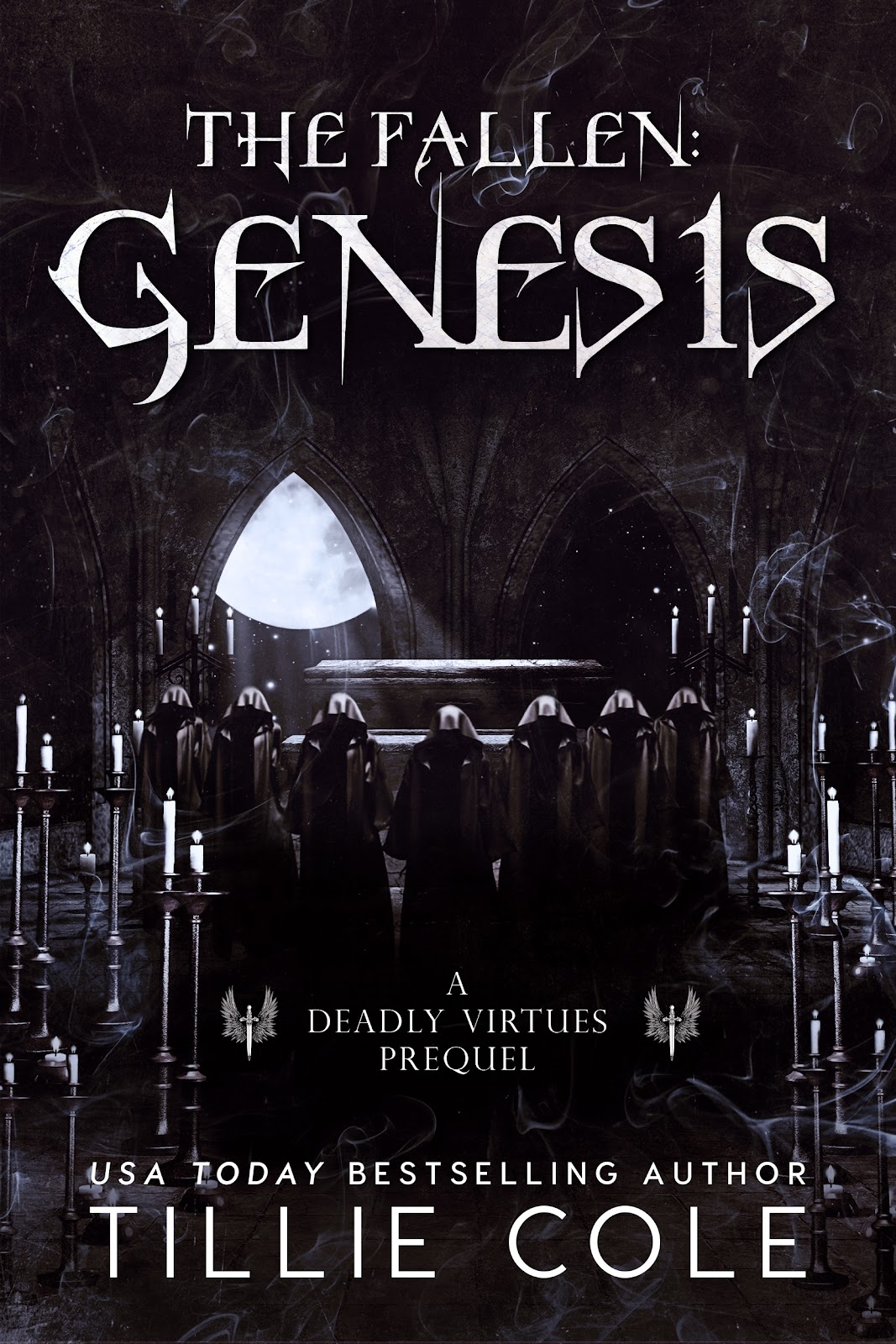 Tillie Cole hails from a small town in the North-East of England. She grew up on a farm with her English mother, Scottish father and older sister and a multitude of rescue animals. As soon as she could, Tillie left her rural roots for the bright lights of the big city.
After graduating from Newcastle University with a BA Hons in Religious Studies, Tillie followed her Professional Rugby player husband around the world for a decade, becoming a teacher in between and thoroughly enjoyed teaching High School students Social Studies before putting pen to paper, and finishing her first novel.
Tillie has now settled in Austin, Texas, where she is finally able to sit down and write, throwing herself into fantasy worlds and the fabulous minds of her characters.
Tillie is both an independent and traditionally published author, and writes many genres including: Contemporary Romance, Dark Romance, Young Adult and New Adult novels.
When she is not writing, Tillie enjoys nothing more than curling up on her couch watching movies, drinking far too much coffee, while convincing herself that she really doesn’t need that extra square of chocolate.

#1CʟɪᴄᴋHᴇʀᴇ: Amazon: https://smarturl.it/h5wu0y Apple: https://apple.co/2G5zLHe Google Play: https://bit.ly/2FV4WVt Kobo: https://bit.ly/3lrApyQ Nook: https://bit.ly/thepassnook     I’ve been in love with her for two years. The first time around I screwed things up. I hesitated and the moment was gone. I passed when I shouldn’t have. Not a total loss. I gained a best friend instead of whatever we might have been. Sydney is hands down the best thing that’s ever happened to me, and I’ll do anything to keep her in my life. Even bury my feelings deep inside. But one hot summer together at the lake filled with lots of teeny-tiny bikinis and I’m ready to risk it all for a second chance. It’s time to take my shot.

Rebecca Jenshak is a self-proclaimed margarita addict, college basketball fanatic, and Hallmark channel devotee. A Midwest native transplanted to the desert, she likes being outdoors (drinking on patios) and singing (in the shower) when she isn’t writing books about hot guys and the girls who love them.

Stay up to date with all things Rebecca!