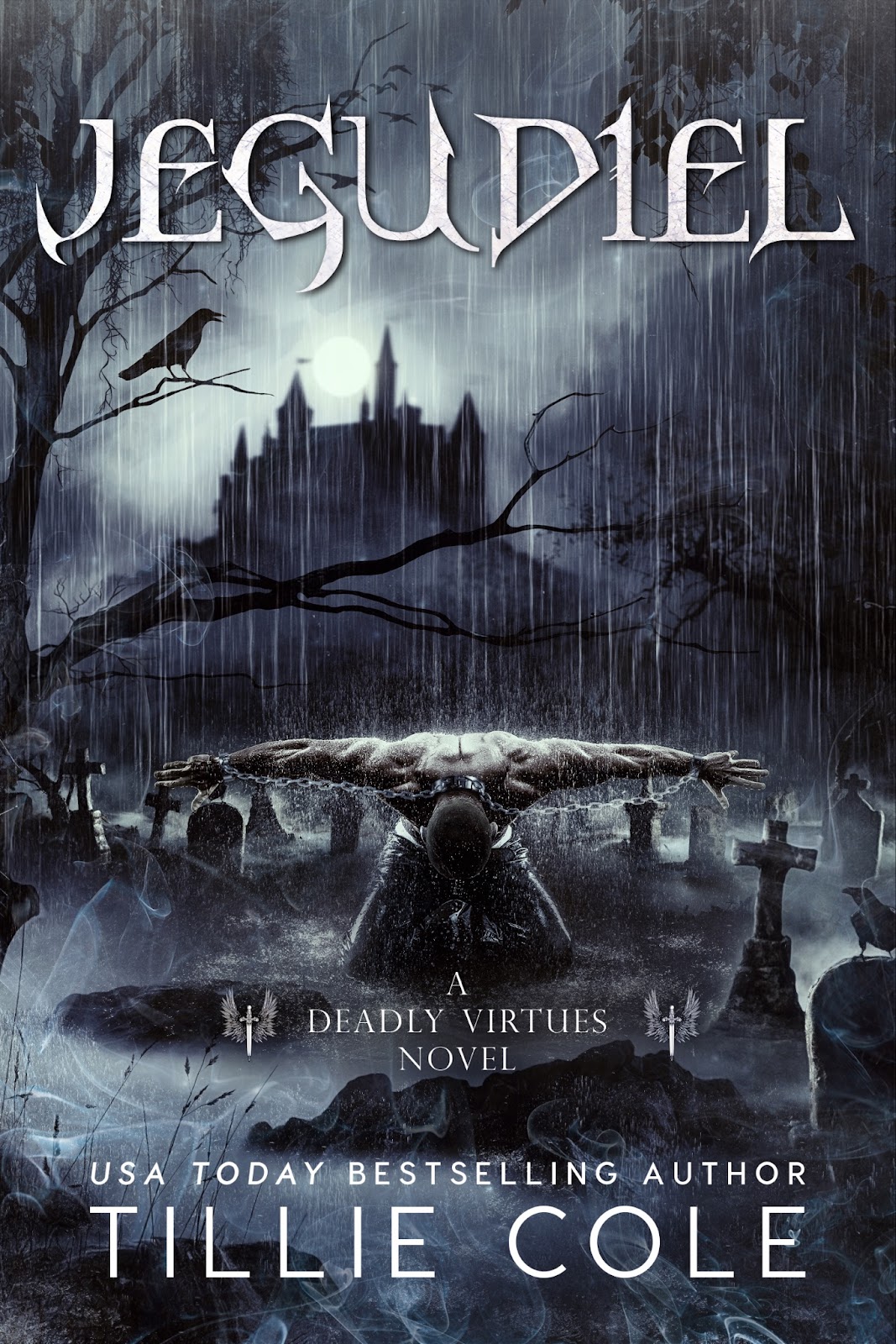 Diel opened his eyes, his hazy gaze traveling down the damp gray stone wall around him. His cheek was cold as it pressed against the freezing floor. His neck ached, the throbbing ghost of numbness snaking over his bare shoulders and the top of his spine. His head twitched, and he flitted his eyes to the iron bars that trapped him inside the cage.

The cage he knew all too well.

The monster within him rippled under his skin, waking from the forced sleep it had been plunged into. A spear of anger soared through Diel’s veins, overriding the aches and numbness and the lethargy of his muscles. Again. They had grounded him again. Lamed his monster again.

Jaw clenched and hands fisted, Diel used his waning strength to lift his torso off the slick ground and sat up. His pulse thudded faster and faster at the fact that he was in the fucking cage. But his pulse had no sooner started to race than the metal collar around his neck crackled against his already scarred and scalded skin. The electricity sizzled its warning, a sharp-fanged serpent, ready to strike the minute he lost control of his senses.

Diel breathed deeply and forced his body to still, the darkness within him to rest. Every inch of him became a statue, and the hiss of the collar lessened to a low-grade hum.

He fucking hated the collar. It was the bane of his existence. But it was a necessity.

Diel closed his eyes and thought back to how he’d got to the cage in the first place—a dream. Another fucking dream that had ripped him from sleep and had seen him racing through the manor looking for someone to tear apart, to sate the bloodlust of the monster living inside him.

No. Not just someone. His monster yearned for some very specific someones.

The Brethren. The motherfucking Brethren that he and his brothers had recently destroyed after they’d captured Maria, Raphael’s woman. The Fallen had headed to Holy Innocents, the school that had robbed them of their childhoods and fucked with their bodies and minds. They had descended, for the final time, to Purgatory, the place where they had been held as kids.

And they had burned it to hell.

The flames may have destroyed Diel’s childhood tormentors, but the rage following the inferno remained. The monster that lived inside him, seeking blood and pain and death, only grew stronger, thirstier, more intolerant of the collar that wrapped around his neck like a leash, denying both of them what they craved—death. Such beautiful, sadistic deaths by their hands.

Diel heard the sound of a pencil scratching on paper and turned his head to see Sela sitting on a chair at the side of the Tomb. He was sketching on a pad of paper, eyes fixed on whatever he was creating.

“Upper hallway, left wing,” Sela said, without taking his eyes off the pad. His long dark hair curtained his face as he concentrated on whatever picture he was purging from his creative brain onto the page. “Gabriel had us bring you down here until you awoke.”

The tendons in Diel’s neck corded. The darkness inside was more than pissed at being handled in such a pathetic way. He ground his jaw so hard that the sound of teeth on teeth made Sela lift his eyes and meet his stare.

Diel inhaled deeply through his nose and exhaled slowly. He mentally wrestled the monster back until its presence was a dull ache at the back of his head, throbbing like the very worst of migraines. Diel sat back on his ass and laid his arms over his bent knees. His head twitched as he fought the everlasting battle to keep his anger in check.

“The Brethren,” Diel said, voice raspy with exhaustion. Sela twirled the pencil in his fingers as he listened to his best friend, the stick of wood and charcoal practically an extension of his artistic hand.

Diel’s eyes lost focus as he bathed in the memory of his collar being turned off in Purgatory. Anger had filled his veins, and Diel and the monster he kept at arm’s length had become one, united in violence and death, twin dark souls synced and, for once in their lives, calm and at peace as they plunged their twenty-inch blades into the men that had destroyed their childhoods.

Destroyed every single part of them.

His temples throbbed, his ever-present migraine pounding like iron bars being slammed into his brain over and over again. His migraines had always been bad, the monster never sleeping long enough to grant a reprieve. It was constantly pacing at the back of his mind, desperate to finally be freed of the collar’s stringent control.

Diel rubbed the back of his neck. “I keep replaying that night in Purgatory.” Memories of killing the Brethren flashed like a highlight reel in his mind. “When the collar was off and we finally got to end them …” His cock stirred as he recalled the feel of his blades slicing into flesh, of hitting bone when they plunged too deep. But his excitement misted away to vapor when he remembered the familiar buzz of the collar being reignited and his monster being lashed and gagged once again. “And then Gabe switched it back on.” It had been like a junkie getting his fix, the most hedonistic drug cocktail of his life, only to be abruptly forced to go cold turkey afterward.

Diel’s head twitched again as his pulse began to race at just the memory of smelling the Brethren’s blood on his skin—the sweetest perfume. His hands flexed as he felt the phantom necks that had snapped under his fingers.

The collar buzzed and sent warning volts soaring through his body. His muscles tensed as he absorbed the pain, as it hissed at the monster inside to retreat. To get the fuck back. Sweat beaded on his forehead; a single drop ran down his spine.

Gasping for air, Diel submitted to the monster’s sudden surge of power to snarl, “I want this fucking collar off. I want to be who I was fucking born to be without the restraints.” Diel tensed and threw the monster back from taking control. The monster retreated, but its anger-tipped words echoed around Diel’s head like they were being blasted through speakers. Diel’s stomach turned and a fissure of panic slithered across his fractured soul at that thought. The thought off actually being free from the collar … of what that would look like, feel like …

Diel knew his monster could never be freed. He knew the collar could never come off. It would consume Diel. It would eradicate every part of who he was.

I should know better than to let Tessa McDaniels pretend to be my fiancée.
Pretending to date the town’s bad boy seemed like a good idea.
From TikTok sensation Lauren Asher comes the final book in the Dreamland Billionaires series.
An all-new meet-cute sports romance from New York Times and Wall Street Journal bestselling author Kristen Proby, featuring Sophie Montgomery!
A "bubbly and sizzling rom-com" with a light love triangle and an absolutely swoon-worthy hero.
𝗡𝗼𝘄 𝗔𝘃𝗮𝗶𝗹𝗮𝗯𝗹𝗲 𝗶𝗻 𝗞𝗶𝗻𝗱𝗹𝗲 𝗨𝗻𝗹𝗶𝗺𝗶𝘁𝗲𝗱